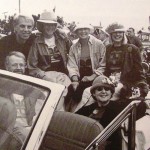 On April 13, 1977, an amorphous group of seventeen or so Bozemanites dedicated themselves to staging a three-day Bozeman arts festival as a “celebration of creativity” among area artists and community. They playfully referred to themselves “hopeless optimists” as the enormity of planning such a festival loomed ahead. A month later, the group decided to postpone the first event until 1978 to allow adequate preparation time and named the event “Sweetpea ‘78” in reference to the Sweet Pea Carnivals held in Bozeman at the turn of the 20th century. Some elements of the early carnivals were borrowed in creating the new festival including: the parade, ball, and celebration of the sweet pea flower. 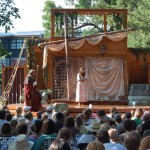 The Sweet Pea ’78 Steering Committee received a grant from the Montana Arts Council to get their fledgling festival off the ground. Many ideas were tossed around in those first meetings and what ultimately transpired that August is remarkably similar to Sweet Pea Festivals now held: dance workshops, arts and crafts sales, art exhibits, a flower show, concerts, Shakespeare in the Parks, children’s activities, vaudeville, and more.

Commemorative buttons were offered for $1 each (5,000 were hand-made by the Steering Committee), but were optional for attendance. Events took place all around Bozeman: Lindley Park, Bogert Park, Ellen Theater, Cooper Park, Montana State University, and Willson Auditorium. The next year both strategies were modified – $2 buttons were required for admittance and nearly all activities took place at Lindley Park. After just a few Sweet Pea Festivals, Lindley Park became synonymous with Sweet Pea and vice versa. Providing the beauty of the outdoors with enough space to host a variety of events, Lindley Park is still the Festival’s primary venue today. 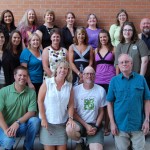 In 1980, an expanded Steering Committee incorporated Sweet Pea Festival and created its by-laws, making the event “official.” With a few minor modifications, these by-laws still govern Sweet Pea. The original Steering Committee then morphed into the Sweet Pea Board of Directors. Mission, goals, and an organizational chart for the Board of Directors were created at a retreat in 1989.

As the fifth Festival approached, the Board of Directors decided to offer a contest for the Sweet Pea poster. The first winner was Peg Dirkx, a Bozeman resident, who received recognition for her graphic depiction of magenta sweet peas. Dirkx’s design was chosen because it “was the most distinctive design exemplifying the Sweet Pea Festival, as well as the best visual design as seen from a distance.” The poster contest was discontinued from 1986-1987 and resumed in 1988. Typically over 50 entries are received for this popular component of the Festival.

Original Sweet Pea Festivals were held with a majority of the events from Thursday-Saturday with an ecumenical service on Sunday. At the seventh annual event, Sweet Pea modified its schedule to the Friday-Sunday now in practice. That year, another exciting change took place with the addition of the Taste of Bozeman joining the line-up of activities. Held on the Wednesday prior to Festival, this new favorite event offered individuals the opportunity to dine on a 1,000-foot-long table down the center of Main Street from one of 30 of Bozeman’s finest restaurants. In 2001, the Taste of Bozeman was replaced by the Bite of Bozeman – 40-50 food vendors set up along a closed-off Main Street and individuals browse, mingle, and get a “bite” to eat. 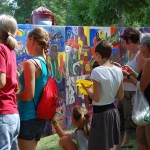 In 1986, the Board of Directors made a revolutionary decision: to donate proceeds from the previous year back to the community. The original founders desired that the Festival support and encourage cultural activities beyond the annual celebration. To this end, the Sweet Pea Festival created a proud tradition of returning any funds gathered beyond expenses back to the community. Any profits realized above and beyond the year’s expenses were given back (and still are) to the community in the form of grants for arts, arts education, and special projects, such as taking care of the beautiful park that hosts the Festival. 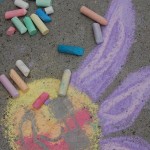 Sweet Pea is always evolving. For example, “Chalk on the Walk” was first offered in 1991. A Sunday-morning church service was once again added to the schedule in 1994 ten years after it disappeared. In 2001, the 10K and 5K adult runs split off from the Sweet Pea Festival but were re-incorporated into the Festival in 2014.

Recent history of the Sweet Pea Festival includes the adoption of wristbands instead of buttons in 2007 and the creation of a contest for the t-shirt design in 2009.  In 2012, the first ever day pass admission option was tried and changed back to a weekend pass with a sliding scale price in 2016.  In 2013 the Ball and the Church Service were discontinued. In 2014 the Board elected to honor volunteers working 3+ hours with free admission to the Festival, helped the City of Bozeman purchase a mobile water bottle filling station, and decided to celebrate the art of craft brewing by adding a beer & wine garden to the Festival. 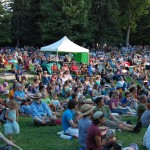 What makes the Sweet Pea Festival different? Up until 2013, the Festival had a policy of “recognizing all contributors equally.” Unlike many other festivals of its size, Sweet Pea did not receive any corporate sponsorship for any aspect of the Festival. Sweet Pea is funded primarily by the sale of admissions, however it was decided in 2013 that in order for the Festival to continue to thrive, sponsors, or partners, are necessary. Second, is the Festival’s reliance on volunteers. Over 400 volunteers run and organize this annual event, a testament to the community’s desire for its ongoing success. From the devoted, year-round, 40+ Board of Directors to the enthusiastic hundreds of volunteers at the Festival, Sweet Pea would not exist without the sacrifice given by so many in the community. 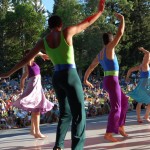 Third, is Sweet Pea’s continued policy of granting any excess funds from the Festival to arts, arts education, and special projects in the community as begun in 1986. 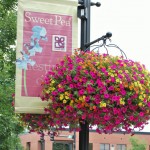 Sweet Pea has been an important part of the arts and the artistic and cultural life of Bozeman for 44 years. It is the hope of all of the dedicated volunteers, past and present, that Sweet Pea will continue on in the exciting and important tradition it has established and continue to remain the most cherished celebration that it is.

Answer our Short Survey
and Subscribe To Our Newsletter

You have Successfully Subscribed!